The Life and Times
Daniel Hubbard Willis, Jr. & Julia Ann Graham Willis
by Randy Willis
randy@randywillis.org
He was born April 2, 1839 and died  May 22, 1900
She was born February 22, 1845 and died  September 28, 1936
They married on January 5, 1867 in Forest Hill, La.
Both are buried in the Graham Cemetery, Forest Hill, La.
Daniel Hubbard Willis, Jr.  was the eldest son of  Rev. Daniel  Hubbard Willis,  Sr. (b. Dec. 28, 1817; d. Mar. 27, 1887) and Anna  Slaughter (b. May 29, 1820; d. Mar.  24, 1876).   Rev. Daniel  Hubbard Willis,  Sr. was the son of  Agerton Willis and Sophie Story.  He was born on Bayou Boeuf  in Louisiana and is buried, along with his wife Anna  Slaughter Willis,  at  Amiable Baptist Church Cemetery near Glenmora, La.  He established many churches and was blind the last 22 years of his life.  His daughter would read the scriptures and he would preach. He settled on Spring Creek,  near Longleaf, La.,  at a community called Babb's Bridge.
Daniel Hubbard Willis, Jr.  was  also, a great-grandson of  pioneer Louisiana Baptist preacher,  Rev. Joseph Willis (b. circa 1758; d. Sept. 14, 1854).   He was the first Baptist preacher west of  the Mississippi River.
Daniel Hubbard Willis, Jr.'s  siblings were:  Eliza Willis,  Mary Jane Willis, David Willis, Martha Willis, Matthew Willis, Dempsey Willis, Calvin Willis, and Robert Willis.  Daniel was raised near  Sugartown, La. and then settled on Barber Creek near Longleaf, Rapides Parish, Louisiana.
Julia Ann Graham Willis was the  daughter of  Robert Graham (b. Aug.  20, 1818; d. Feb. 10, 1890) and Ruth Smith  (b. Dec. 5, 1813 d. Jun.  2, 1869).  Robert Graham  moved to Louisiana from Texas in 1841.  Soon after marring Ruth Smith (a trapper's daughter) in Natchitoches, La., they moved to Forest Hill, La.  He was a successful farmer and cattleman there.   Ruth had told Robert that she wished to be buried at the top of a hill on their land near Forest Hill.  She was and that hill is known today as the Graham Cemetery.  Robert Graham's  father was  William Graham.  Robert Graham had  two brothers: another William Graham and Samuel Graham.    Robert and Ruth Graham are both  buried at the Graham Cemetery.
Julia Ann Graham Willis' siblings were:   Annie Graham Willis, Emily Graham Butter,  Maggie Graham Willis,  Demerius Graham Willis, Elizabeth Graham Merchant,  Katherine Graham Sermons,  Lucy "Ruth" Graham Moore,  William Graham, and Lorenzo Dow Graham.
Daniel Hubbard Willis, Jr.  married Julia Ann Graham on,  January 5, 1867, soon after the end of  the Civil War.
Daniel Hubbard Willis, Jr. in the Civil War
Daniel Hubbard Willis, Jr. enlisted, September  29, 1861, at Camp Moore, La.,  in the Confederate Army as a Pvt. 5th. Company Battalion,  Washington Artillery of  Louisiana.  He was  (Mar.  16, 1864)  in  Raxdale's Company E, 16th. La. Regiment, Gibson's Brigade, Army of  Tennessee.  He was promoted to  2nd Sergt.  on  Mar.  5, 1865.  He was captured and made a prisoner of  war.  Daniel was paroled at Meridian, Mississippi on May 14, 1865.   (Also see Andrew B. Booth,  "Records of  Louisiana Soldiers and Louisiana Confederate Commands,"  (New Orleans, La. 1920) Vol. I: 1115)
Daniel Hubbard Willis, Jr. fought in many of the great battles of the Civil War, including  Shiloh, Bull Run, Perryville, Murfreesboro, Missionary Ridge and Chickamauga.
Excerpts from Daniel H. Willis, Jr.'s obituary: Alexandria Town Talk,  23 June 1900:  "He participated in all the hard battles of  that army and for bravery, soldierly  bearing, discipline and devotion to duty, he was unexcelled in his entire Brigade.  He was made Orderly Sergeant of  his Company at an early period of the war.  It has always been said by his surviving comrades that when any particularly dangerous service was required, such as scouting parties to ascertain the position and movements of the enemy, he was always selected for the place, and never hesitated to go, let the danger be what it may.

He was for a long time connected with the famous Washington Artillery, and at the battle of Chicamauga so many horses of the battery to which he was attached were killed that they had to pull the guns off the field by hand to keep  them from falling in the hands of the enemy.

He was paroled at Meridian, Miss.,  in May of  1865, and brought home with him a copy of General Gibson's farewell address to his soldiers and of him it can be truly said that through the remaining years of his life he followed the advice  then given by his beloved commander.

His love for the Southern cause, and for the men who wore the gray, was not  dimmed by years, but he lived and died firmly convinced of the justice of the  cause for which the South poured out so much of her best blood and treasure...Before death he expressed a wish that he might see his children who were at home, especially Randall L., his baby boy, whom he had named in honor of his beloved Brigadier General, Randall Lee Gibson.  He also requested that his Confederate badge be pinned on his breast and buried with him."
Gibson,  later helped establish Tulane University and was elected to the U.S. Senate in 1883. I was named after my grandfather,  Randall Lee Willis,  who was named after Randall Lee Gibson,  in 1886.  Current, ed.,  "Encyclopedia of the Confederacy"  (also see "Army of  Tennessee Louisiana Division The Association and Tumulus"  by Jerry Johnson Wier, The Center for Louisiana Studies, University of Southwestern Louisiana,  1999).
Can You Feed Her Son?
Soon after the Civil War, Daniel Hubbard Willis, Jr., became the first of  four Willis' brothers to marry four Graham' sisters.   He married Julia Ann Graham  on January 5, 1867.  (Daniel called her affectingly  Julieann).   When Daniel asked Julia  Ann's father, Robert Graham,  for her hand in marriage;  Robert asked  him if  he could feed her.  Daniel replied "that he had a horse, a milk cow, a barrel of corn and a barrel of molasses."  Robert responded "my goodness son you have enough to marry several of my daughters."  They were married at Robert Graham's home near Forest Hill.
Later, three of  Daniel's brothers would marry three of  Julia Ann's sisters. Calvin Willis married Demerius Graham , Robert Willis married Annie Graham and Dempsey Willis married  Maggie Graham.   A fifth brother, Matthew Willis, also asked a fifth sister, Lucy "Ruth" Graham,  to marry him.  She said no and later confided in her sisters,  "he was just too ugly."  Ruth Graham later found her true love,  James Moore, and married him.
Daniel made good his promise to  "feed" Julia Ann and on January 16, 1868 (just a year after their wedding) he sold his father-in-law, Robert Graham,  119 acres "in the fork of  Barber Creek,"  for $350.00. A sum that would have been a years wages for many at that time.  When Daniel died, in 1900, he left Julia Ann,  $35,000.00 in gold, a home, land, and the woods full of cows, on Barber Creek, near Longleaf.
The Law, Cattle, Barber Creek & Home
After the end of Civil War, in 1865,  Daniel H. Willis. Jr., was made Constable  of  Spring Hill, Rapides Parish.   Julia Ann often spoke of  the time Daniel captured an outlaw from Texas who was hid out in the piney woods of  Louisiana.  She said it was to late to make the horseback trip to the jail,  in Alexandria, therefore Daniel handcuffed the outlaw to the foot of  their bed for the overnight stay.  Daniel told the outlaw he better not make a sound.  She said Daniel slept soundly, but she did not  sleep a wink all night.
He later was a successful rancher. He and his sons would buy cattle in East Texas and then drive them to the railroad  at Lecompte, La. to be shipped north.  Once, on a cattle drive from Texas, in 1898,  the cattle stampeded in the woods. My grandfather,  Randall Lee Willis, who was only  12 at the time and riding drag, thought his dad, Daniel, had been killed;  but then he could see his father's huge white hat,  waving high in the air,  in front of the cattle.

Julia Ann's grandchildren recalled that she would read her red-lettered New Testament Bible daily on the front porch of  the "Old Willis Place"  near Longleaf on Barber Creek.  She would then open her trunk and pull out Daniel's photo, who had preceded her in death,  and a tear would often be seen in her eye.
Julia Ann also loved oranges. She would eat them, lay  the peals on the window seal  and later eat the peals.  When asked  what she was doing she replied  "I don't know for sure, but I think  these orange peals are good for you."  She once was bitten by a ground rattler, at age 75, and survived.
Julia Ann swam  in Barber Creek, twice a day,  until age 90. There is a huge gravel pit where their  home, the "Old Willis Place"  once stood.  The gravel pit has destroyed the timber and Barber Creek.  It became overrun with sand and silt;  literally smothered to death.  The EPA finally made  them shut down,  but it was too late.
My late cousin, Ilie Willis Close (1907-1995),  wrote to me about the Old Willis Place:
"The home was a gathering place for all the family.  There was always food cooked for family and friends. There was lots of blackberries, huckleberries and fruit of all kinds for good pies.
The home was about a quarter of a mile from Barber's Creek,  known to be one of the coldest and clearest waters in the area.  Grandma  [Julia Ann Graham Willis] would walk down and swim sometimes twice a day. She said that was what had prolonged her life. All of the children and grandchildren loved to go swimming with her.
She was reared a Methodist but later joined the Baptist Church and was a devoted Christian.  She read the Bible daily.  We use to joke and say  'she didn't think there would be anyone but Baptist in Heaven.'  Her hobby was making quilts and she kept the family supplied with her hand work."
Tragedy
Daniel and Julia Ann were not immune from tragedy.  On a trip away from home in 1880,  Julia Ann told Daniel  "I feel something is wrong at home."  After returning, they found their eight year old son,  David Eugene,  deathly ill with appendicitis.  He soon died.  Julia Ann would later tell her grandchildren, that she vowed that if she every lost another child, she would never let herself grieve as she did for David Eugene.  The next year, 1881, her four month old baby, Stella,  died.  Many years later, on December 23, 1935, she lost another son,  Dr. Daniel Oscar Willis,  in an auto accident.   He was born three years after David Eugene.  Julia Ann would live only nine months after his death.
Daniel Hubbard Willis Jr.  died,  from kidney trouble,  at  his son, Dr. Daniel Oscar Willis' home near  Leesville, La., on  May 22, 1900.  Julia Ann Graham Willis died of old age on  September 28, 1936.  Both Daniel and Julia Ann  are buried at the Graham Cemetery near Forest Hill,  not far from their beloved Barber Creek.
Daniel Hubbard Willis Jr. and Julia Ann Graham Children:
1)    Henry Elwa Willis was born 6 OCT 1867. He died 18 JAN 1945 of  pneumonia. He was a farmer and cattleman. He is buried at the Paul Cemetery in Lecompte, La. He married Sarah F. Duplissey,  Dec., 1890. Henry Elwa Willis and Sarah F. Duplissey had the following children: Clarence I. Willis (b. Jan. 18, 1892;  d. Dec. 4, 1940), Viola Willis (b. Dec. 28, 1893; d. Dec. 14, 1973), Elbert K. Willis (b. Feb. 26, 1897;  d. Dec. 19, 1974),  Henry Willis (b. Mar.  30, 1899; d. Sept. 29, 1977), Mae Willis (b. May 1, 1902), Kit C. Willis (b. May 8, 1905), Bessie Willis (b. July 8, 1908), and Frank Willis (b. Dec. 2, 1915). 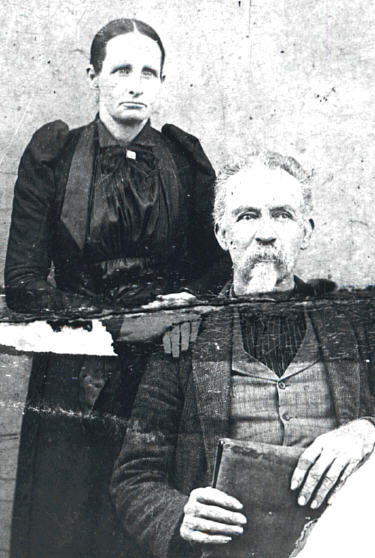