Randall Lee Gibson was born in Versailles, Kentucky to Tobias and Louisiana (Hart) Gibson. His father was a prominent sugar planter in Terrebonne Parish, Louisiana. Young Gibson graduated first in the class of 1853 from Yale College, studied law at the University of Louisiana in 1855, and traveled Europe before becoming a planter in Lafourche Parish, Louisiana in 1858. He had three sons by his marriage to Mary Montgomery on January 25, 1868. At the outbreak of the Civil War, Gibson, a Democrat, became aide-de-camp to Governor Thomas O. Moore of Louisiana. (Also see Randall Lee Gibson's Congressional Biography http://bioguide.congress.gov/scripts/biodisplay.pl?index=G000165"> GIBSON)

In August 1861 he became colonel of the 13th Louisiana Regiment and soon became known for his discipline. He performed well while commanding the 4th Louisiana brigade at the battle of Shiloh and suffered enormous casualties at Hornet's Nest. He distinguished himself at Perryville in 1862. In 1863, Gibson also participated in the Tennessee battles of Murfreesboro and Missionary Ridge and commanded a brigade at Chickamauga.

On January 11, 1864, he was promoted to brigadier general. He subsequently fought with distinction in the Atlanta campaign (1864) at the Battle of Bald Hill. At the Battle of Ezra Church (outside Atlanta) Gibson's brigade was decimated. He fought at the Battle of Jonesboro and again had severe losses. In the Nashville campaign (1864) he protected the rear of Hood's army on its retreat. In the spring of 1865, he held the Spanish Fort at Mobile. He surrendered and was later paroled in May 1865 along with my great-grandfather Daniel H. Willis, Jr.

After the war, Gibson returned to planting and practiced law in New Orleans. He was elected (but not seated) as a Democrat in the U.S. House of Representatives in 1872; he was reelected and seated two years later and served continuously until 1882. From 1883 to 1892, he served in the U.S. Senate. In 1886, my great-grandfather Daniel H. Willis, Jr. named his youngest son, Randall Lee Willis, after his former commander in the Civil War, General Randall Lee Gibson. I was named after my grandfather Randall Lee Willis.

Gibson was an agent for Paul Tulane in founding Tulane University, of which Gibson was the first president of the board in 1885. He died December 15, 1892, on a vacation in Hot Springs, Arkansas. Yale in the Civil War ; Fortier, A History of Louisiana , I. Biographical Dictionary of the Confederacy , Walkelyn.

My great-grandfather, Daniel Hubbard Willis, Jr., enlisted, September 29, 1861, at Camp Moore, La., in the Confederate Army as a Pvt. 5th. Company Battalion, Washington Artillery of Louisiana. He was (Mar. 16, 1864) in Raxdale's Company E, 16th. La. Regiment, Gibson's Brigade, Army of Tennessee. He was promoted to 2nd Sergt. on Mar. 5, 1865. He was captured and made a prisoner of war. Daniel was paroled at Meridian, Mississippi on May 14, 1865. (Also see Andrew B. Booth, "Records of Louisiana Soldiers and Louisiana Confederate Commands," (New Orleans, La. 1920) Vol. I: 1115) . Current, ed., Encyclopedia of the Confederacy (also see Army of Tennessee Louisiana Division The Association and Tumulus by Jerry Johnson Wier, The Center for Louisiana Studies, University of Southwestern Louisiana, 1999). Also see LOUISIANA HISTORY, the journal of the Louisiana Historical Association , vol. 28, pp. 245-262 and vol. 36, pp. 389-411.

Daniel Hubbard Willis, Jr. fought in many of the great battles of the Civil War, including Shiloh, Bull Run, Perryville, Murfreesboro, Missionary Ridge and Chickamauga.

He was for a long time connected with the famous Washington Artillery, and at the battle of Chicamauga so many horses of the battery to which he was attached were killed that they had to pull the guns off the field by hand to keep them from falling in the hands of the enemy.

Excerpts from Daniel H. Willis, Jr.'s obituary: Alexandria Town Talk , 23 June 1900: "He was paroled at Meridian, Miss., in May, 1865, and brought home with him a copy of General Gibson's farewell address to his soldiers and of him it can be truly said that through the remaining years of his life he followed the advice then given by his beloved commander. His love for the Southern cause, and for the men who wore the gray, was not dimmed by years, but he lived and died firmly convinced of the justice of the cause for which the South poured out so much of her best blood and treasure...Before death he expressed a wish that he might see his children who were at home, especially Randall L., his baby boy, whom he had named in honor of his beloved Brigadier General, Randall Lee Gibson. He also requested that his Confederate badge be pinned on his breast and buried with him." 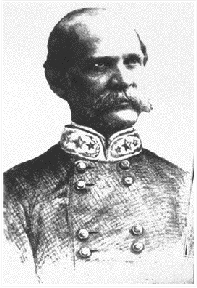